The first week of the curriculum project was a mixed bag, as can be expected. On our third day of implementation, I went to each classroom excited to work with the kids on describing things by putting their hands in the mystery box.
There were no teachers in the classroom, although the kids were there and eager to get to work. The youngest and most energetic teacher came by to ask me to teach class in her absence since the 2nd-3rd grade teacher was desperately ill and needed her attention.
I worked in her class for an hour and managed to get the kids to write words in Quechua about the five senses and illustrate them. We did not get as far as the mystery box. Many o f the kids asked me questions in Quechua I could not answer.
I moved on to the 4th and 5th grade class and we had a lively discussion about the five senses; we then had kids put their hands in the box and describe in Quechua what they could sense with their hands. All the descriptive words went on the board along with my instructions to write a paragraph describing the living things we had discovered in the schoolyard and described via the mystery box.
The kids dutifully copied down the words and the assignment, but not a single one wrote a paragraph. I asked if they knew what a paragraph was. No one answered.
I went on to the 2nd and 3rd grade class and again was greeted with great enthusiasm; the kids loved the mystery box game. Yet again, no one wrote any descriptive sentences at the end of the game.
None of the teachers taught their classes that day.
The sick teacher recovered and returned to Cusco with her baby. The other two teachers cancelled class for the next day due to a festival they wanted to attend. We got on a bus together and rode to a town two hours away for this special religious festival.
So much for our first week of the curriculum project.
Kids in rural schools are often ready to work, while their teachers are not. It is easy to blame the teachers, but is anyone actually paying attention to them or their professional and personal needs?
Sometimes this situation reminds me of educational settings I know intimately in the US. 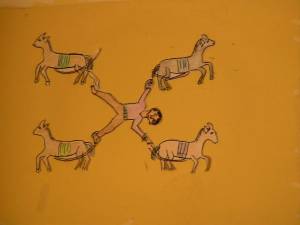 Written Wednesday, July 14
This was the first week of trying out the curriculum kit idea in an Andean school. Monday night the teachers and I met with about thirty parents from the community (without the benefit of translation to Quechua from my partner Martin, who arrived half an hour after the meeting due to a landslide on the road.) I presented a slide show to emphasize the following ideas:
• Quechua language and culture is endangered; less and less children are learning it and more are abandoning it as they move from country to city
• Teachers in Cusco are working together to improve curriculum materials for the teaching of Quechua in the classroom and I am here to support them as well as learn about their language
• Teachers in Boston met 100 years ago to improve materials for teaching natural sciences and created the Boston Children’s Museum, which lends learning kits to schools
Then I showed slides of selected curriculum kits that the Boston Children’s Museum lends out, including their most popular one, produced hand in hand with the Wampanoag people of Massachusetts.
We talked about creating a kit for this town that would involve kids in hands-on learning in Quechua and asked parents to help by providing wool yarn, lending tools for a school clean-up day, supporting kids’ homework by telling them stories, riddles and songs in Quechua about local plant and animal life, and showing up on the last day in traditional dress to see their kids’ presentations and be videotaped sharing their folklore and local knowledge.
Parents were shy at first, then enthusiastic and agreed to participate.
This week’s activities centered on taking all of the kids outside in groups to mark a meter square somewhere in the schoolyard with yarn and then write down observations of everything in the square. We talked in Quechua about the scientific method and antecedents in their culture for systematic observation of living things. Kids located and identified all kinds of things in the schoolyard, ranging from sheep and horse dung, beetles, medicinal plants, weeds, flowers, pieces of paper and plastic, spiders, buried rags, tufts of animal hair…In a couple of classes kids learned to measure the perimeter of a square and rectangle. All of the classes read aloud from their journals and listened to their teachers read stories and recipes related to the local plant and animal life in Quechua.
Tomorrow we will have a mystery box in which we put objects they have located outside one by one into a box with a hole in it. One kid must put a hand inside the box and describe what they think is in there; the descriptive words will go on the whiteboard and then the whole class will write descriptive sentences or paragraphs about living things in their schoolyard.

This will be a short entry because I am leaving at 4:30 in the morning for Ccotatocclla.
I am excited because I heard from my friends Martin and Hipolito that the family I will be staying with, and their community, speaks a different kind of Quechua from Cusco Quechua. It is more like Bolivian Quechua, they say; more mixed or influenced by Aymara.
I told them the joke that the difference between a language and a dialect is an army and a navy (Max Weinreich?) In other words, whoever has power gets to claim their variety of speech is the standard.
It will be cool to learn this variety of Quechua since it may serve me better in South Bolivia later as well.

The other quick thing I want to say is that my indigenous partners in this endeavor are truly experts…experts regarding pedagogy, regarding the communication of their identity to others, regarding the structure of their language and artful ways of speaking. When I am writing proposals it often must sound like I am proposing to “bring” them something, but actually I am sure I will be learning much more from them than they from me. It would take a lifetime of work to amass the kind of expertise they have.

I just arrived at Niños Hotel in a restored colonial building three blocks from the Plaza de Armas. My taxi driver and I spoke Quechua all the way here (me haltingly) and when I told him I would spend the month in Paucartambo he said “Oh, you’ll be really talking a month from now.” I was excited to be able to answer him in sentences this time; previously I have understood and nodded.

Getting to Cusco is a strange experience because there are literally hundreds and hundreds of people from all over the world headed here with the express interest of seeing Macchu Picchu. Those who live here sometimes feel like wallpaper. Actually, I think there are probably about 4,000 people a day that enter the sanctuary of Macchu Picchu, unless they have started to limit it more than in 2008.

At 6 I am going to an indigenous ceremony on the lawn of what was the main Inca temple, the Quricancha.

Hi Friends and Family:
I started this blog three summers ago. The moment I returned home from that trip I was planning the next one; knowing I must return. Spent a good amount of the past two years with my mind in the Andes, and six weeks of last summer actually there again. Now it is time to go back, and folks have asked for more blog posts, so here I go:

I have three notions to share: the first about threats to the Quechua languages; the second about two homes; the third about modern-day mythology.

1) Rimay:
The Quechua verb “to speak,” rimay, gave the city of Lima its name. But the word has taken a strange turn in its contact with Spanish. In Bolivia, “rimay” now means “to speak against/gossip/malign” while the European word “parlay” has taken its place in Bolivian Quechua. I learned this when trying to show off my new abilities in Quechua to a Bolivian friend – I said “let’s speak Quechua” using rimay and she said that made no sense.

This is not the first time that Quechua words have been distorted through contact. Regina Harrison points out that the word “supay” for both good and evil spirits took on the restricted meaning “devil” within less than 40 years of the Spanish conquest. (Signs, Songs, and Memory in the Andes, 1989.)

What does it mean to speak a language whose social relationship to another language causes the negative distortion of its most basic vocabulary?

2) Thoughts about Two Homes:
If I ever get to write a book about the paradoxes that the Andean mirror holds up for this planet, I would like it to start with the image of two houses. Each of them exists today on the same planet. The first one sits in my hometown in the center of a park; it was built by a college professor of history and his students to show everyone what building methods and standards were required in Williamstown at the time of its founding around 1753. “In order to gain a title to a lot, settlers were required to clear five acres and construct a house measuring at least 15 by 18 feet with a 7-foot stud, hence the name “regulation” house.”

I walked by that living museum hundreds of times in my childhood, and the couple of times I went inside I noticed that the floor was made of dirt and the fireplace of stone. It seemed a dark and small place to contemplate living.

Now I am about to spend a month living in a house that is of a similar size and level of technology. It is not made of wood but rather, adobe; and the fact that it has a fireplace at all is an innovation not used in most other rural Andean homes I have been in, which use tiny clay platforms for cooking over fires of sticks, and a hole in the wall for escaping smoke.

The paradox, to me, is that these houses exist at the same time. One of them is a museum symbolizing forgotten ways of living; the other represents innovation and is lived in now.

What does it mean to live in a house that represents forgotten and abandoned ways for one society, and innovation for another? I know that it will mean something different to me, the visitor, than to the family that is hosting me.

3) Modern myths:
I have been reading a fabulous book about north American Catholicism, written by a great intellectual and big-hearted religious reformer named James Carroll (“Practicing Catholic.”) One of the striking statements Carroll makes early is that “Once a believer has learned to think historically and critically, it is impossible any longer to think mythically.” I tend to disagree; I think the lines between myth and criticism simply get more complex and hard to detect as society gets more dependent on science.

I will be exploring the relationship between critical and mythical thinking as I relate to today’s practitioners of animist religion. One hunch I have is that we post-industrial city-dwellers imagine ourselves to be more scientific thinkers than folks who work the land and worship stones. Certainly, writing and computers allow us to communicate our thoughts to one another in greater volume. But I doubt that people who work the land are any less attuned to experience as the measure of reality than we are.

That’s it for now folks.
I get on the plane tomorrow and wake up in Peru on Friday.